Hyperfocus – How to Use It To Your Advantage 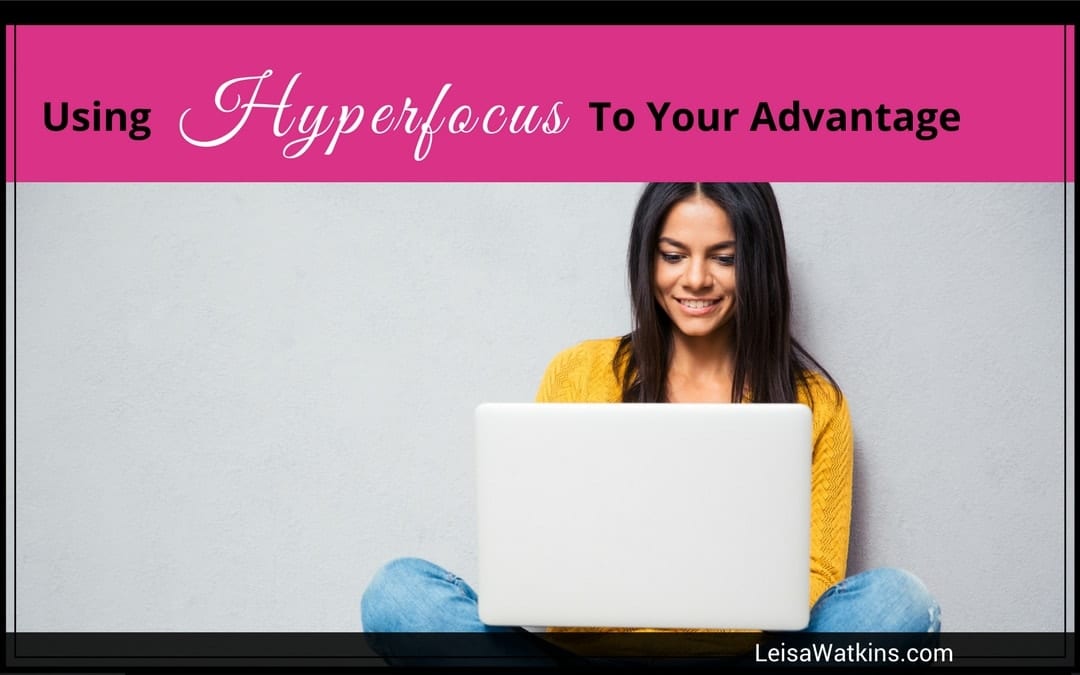 At times, I am organizationally challenged. I tend to lose things.  It’s not that I don’t know how to be organized – I do. In fact, people have said that I am the most organized person they know. Others have attached the “organized” label to me because of my ability to develop systems and processes for accomplishing a wide variety of tasks. And, for the vast ability I have to get things done – even large projects that no one wants. Plus, I’ve usually gotten them done them single-handed – yes, delegation is something I am working on).  My ability to get it all done boils down to my gift to hyperfocus.

Hyperfocus Does Have its Advantages

The ability to hyperfocus on things for hours on end can get lots of big projects done.  But in my case, at least, the big projects get done. But, the little ones often remain on my to-do list for a long, long time.

Hyperfocus a common symptom for someone with Attention Deficient Disorder or ADD and an ADHD in both children and adults.

According to healthline.com “ADHD is not necessarily a deficit of attention, but rather a problem with regulating one’s attention span to desired tasks. So, while mundane tasks may be difficult to focus on, others may be completely absorbing.”

Once I get started on a project I go at it for days, or even weeks, literally stopping briefly to sleep and even forgetting to eat. The dishes stack up in the sink, no one in the family will have a clean thing to wear, but my filing system will be in top shape by the end of the week – just because that is what I am focusing on.

Then I’m on to the next big project. The filing gets neglected again for months and months, or even perhaps years. Based on the number of boxes of papers that I had to go through recently I would say it is closer to a year.

It’s a vicious cycle. It can lead to lots of different things all partially done and it can lead to resentment from family members. And admittedly it drives me just a little crazy.

With a mind that is always thinking about a thousand things at once (at least it seems that way) those unfinished or neglected items are always there in the back of my mind. It gets tiring just thinking about it. (And I have finally figured out how to deal with that – I will post about that later). I once read that Attention Deficit Disorder should be called Inconsistent Attention Disorder and I totally agree. I’m not lacking anything in the attention department, it’s just that generally my attention is focused on too many things.

Let’s say I have just one hour to focus on house cleaning. Normally I would start in one room and concentrate all my efforts on the room, and most likely one thing in that room – perhaps the closet. That leaves the other rooms untouched and the remainder of the room looking just as messy as before.

A Method of Dealing with Hyperfocus That Works For Me

The good news is that some time ago I figured out a method that works wonders for me – at least when I use it. Plus it takes advantage of my ability to hyper focus.

It takes just one tool. A small timer, one that can go with you from room to room. I got mine at the dollar store and it can clip on to the waistband of my pants.

Here’s what I do when I clean the house:

I set the timer for 15 minutes. Then I concentrate fully (hyperfocus) on the bathroom for those fifteen minutes. I concentrate on the things that will make the most noticeable difference the room.  Once the fifteen minutes are up I drop what I am doing and move on to the kitchen. After another fifteen minutes, I’d move to the living room, and then to the bedroom.  Sure each room may not get 100% done in a day.  But this works for me and when done consistently none of the rooms then get totally out of control and many of them stay very, very clean.

The alarm is a signal to stop hyperfocusing on that project.
Fifteen minutes at a time doesn’t seem like an overwhelming amount of time.

Here’s how I handle business tasks:

I always got several large projects going.  Projects that can take an average of six months to get it ready to the launch stage.  Hyper-focusing on a single project simply wouldn’t work.  So I set a time limit for that particular project.

If it’s a business branding project for a client I set the timer and work on it for the time allotted.  Then I move on to the next project doing the same thing.  One thing I’ve finally learned is to not to try to take on to many projects and too many clients.

If I’m working on some social networking and I dedicate a set amount of time to commenting on blogs or forums. But  I also set myself a limit of usually five comments.  So I keep a scratch piece of paper next to me and I find a blog post I want to comment on.  I make a comment on that blog post and make a hash mark on a piece of paper.  Make another comment and make another hash mark.  Once I reach five comments I’m done. Even if I have time remaining.  That time remaining can then be dedicated to something else.  Maybe a walk.  What happens if I run out of my allotted time and haven’t made the five allowed comments?  I walk away anyway.

Using Hyperfocus To Your Advantage

The ultimate ability to get things done rests in the fact that I don’t try to fight the desire to hyperfocus.  But rather, I use it to my advantage.

How do you focus your efforts on a project?
What tips do you have that help your concentration levels?

Where did I put that timer?