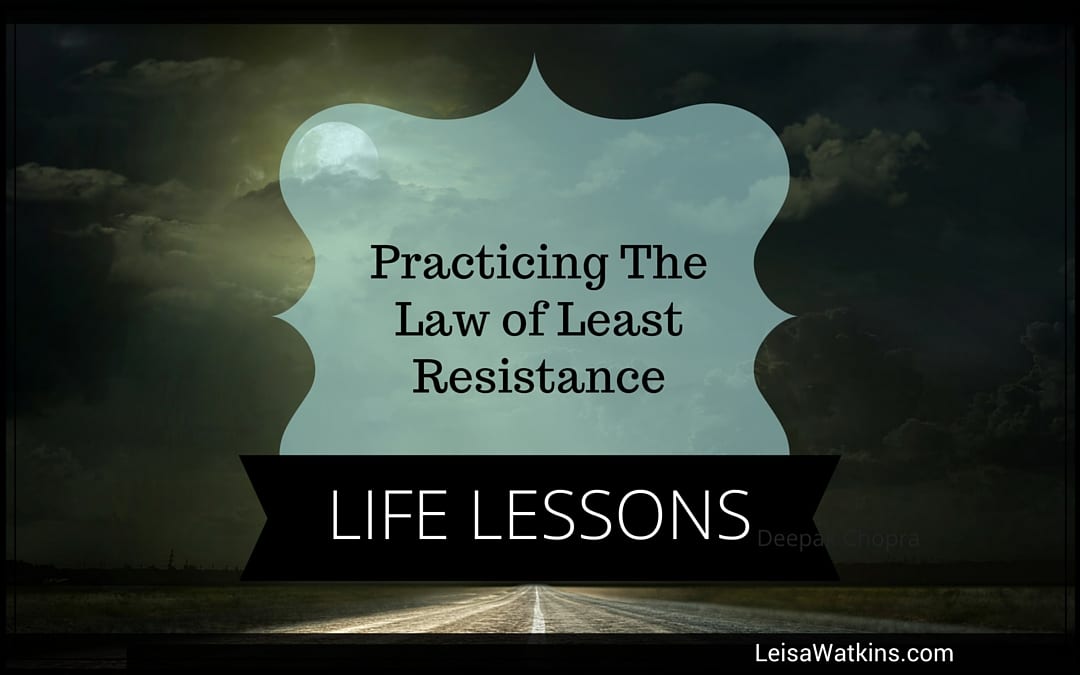 Exhausted – that is how I felt when we returned from the ER visit that Friday evening.

My youngest daughter had broken her arm in a rollerskating accident.  It was extremely late, everyone was hungry, and I just wanted to crawl into bed, but those motherly instincts kicked in and I managed to prepare some type of meal, and handle a few business matters before crawling into bed at about 1:30 in the morning.

I had welcomed 2011 with such optimism and excitement. Yet, exhausted was my normal lately.

I was exhausted and was looking forward to perhaps sleeping in just a little (as long as the puppy would let me anyway).  But the phone startled me awake at 5:30 am.

A phone call at that time of day always gets my heart a pumping, and this time rightfully so.  The news on the other end wasn’t good.

I learned that the police had been dispatched to notify me that my husband was at the hospital after being involved in an automobile accident, but they hadn’t arrived at my home yet.

My husband was on the other side of the phone trying to reach me before I left for the hospital.  “Bring a pair of pants with you to the hospital.” he said.  “They had to cut my pants off me.”

My mind quickly raced through all those movies and TV shows I’d seen where they had to cut pants off of people.

I began to fear the worst.

Craig explained that  a car going at an extremely high speed (they now estimate 80 or more miles per hour based on eye-witness accounts) plowed into the truck he was riding in.

I could tell he was in severe pain, despite his attempts to sound optimistic.  He had just returned from getting X-Rays and CT Scans and they didn’t’ yet know how severe his injuries were.

I had a 30 minute ride to the hospital and all sorts of  thoughts raced through my head.

I tried to not think about it, but that 30 minutes was a long time to keep my idle mind busy with something else.

And then I found…

I felt like yelling at the Universe, “Hey wait a minute!  I started this year out so optimistic!  I am loving life.  Everything is going “as planned.” And YOU had to go and throw all this stuff in!”

I gained my composure before walking into the hospital. My husband and I waited together for an eternal 15 minutes after my arrival to the hospital to get the word that his spine was not broken.  He had a lot of muscle and ligament damage and that would take quite some time to heal.  Just how long we aren’t sure yet. I now know that it would take at least sixteen months to get back to an almost normal state.

And so I found my best laid plans for the rest of 2011 simply wouldn’t do.

You see shortly after…

The medical bills escalated, our income plummeted, the house fell into major disarray.  The times felt tough.  All my goals, all my plans, for the rest of the year were kissed goodbye.

Typically, my Type A Personality response would be to swim against the current.

To fight the flow of events.

To work very, very heard to make things all better.

But I came to the realization that doing so doesn’t serve anyone.

Where my energy didn’t belong was in the fight or in the resistance.

We thrive when time and energy resides in a place of healing and in a place of love and light, rather than remaining stuck in fight or resistance. 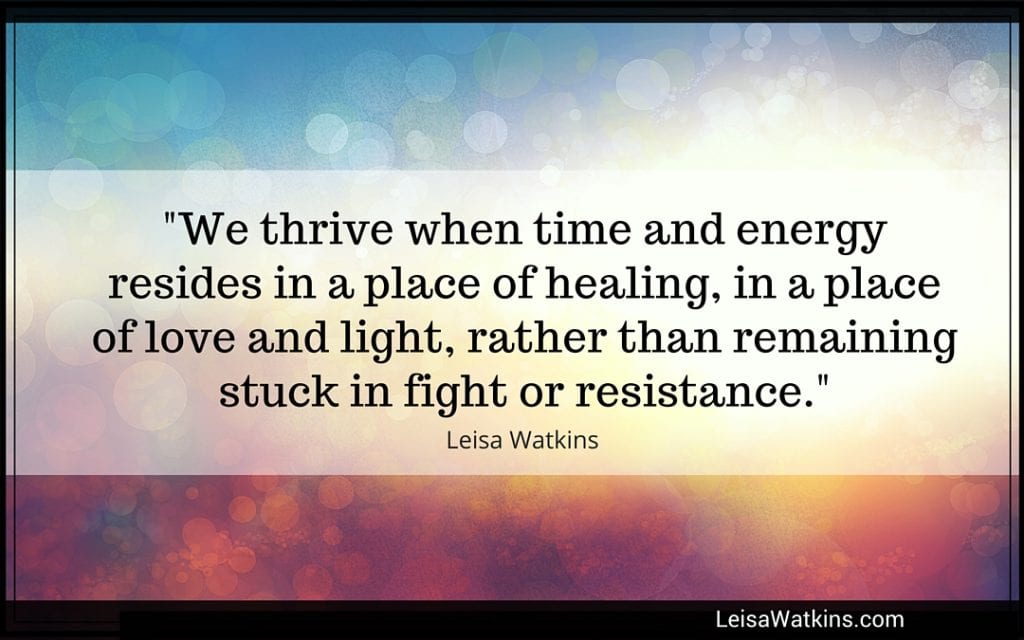 Yes, we often struggle to stay in the fight, thinking that is the thing winners do.

Yes, there is a time for a battle against our natural selves. But there are times when one should go with the flow.

I choose to flow with the current.

I choose to surrender to the circumstances.

I choose to trust God.

And I choose to focus on healing love.

And during those times when I found myself residing where the energy is I felt remarkably peaceful.  I trusted that what we need to survive, no not survive, rather thrive, will flow into our lives.

At other times, when I am fighting the flow of events I panic.  I begin to buy into fear and that fear doesn’t serve any of us well right now. 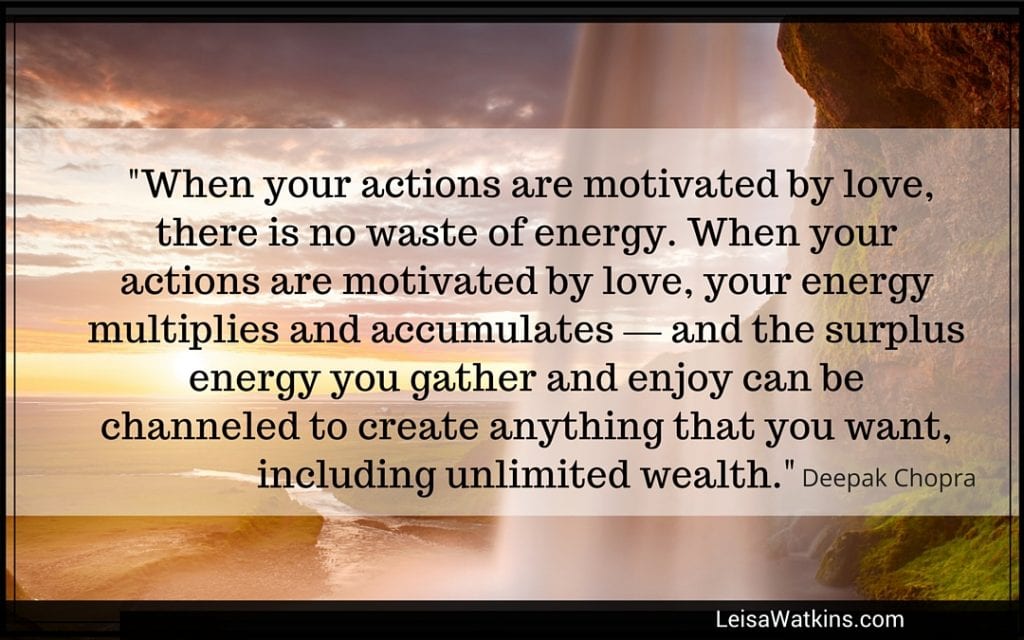 “You can think of your physical body as a device for controlling energy: it can generate, store, and expend energy. If you know how to generate, store, and expend energy in an efficient way, then you can create any amount of wealth. Attention to the ego consumes the greatest amount of energy. When your internal reference point is the ego, when you seek power and control over other people or seek approval from others, you spend energy in a wasteful way.“

The lesson for me was for increased energy allow people, situations, circumstances, and events as they occur.

Channel the energy in an efficient way.

Give up the struggle.

Give up the desire to control the circumstances and to live in a place of love and acceptance.

And in that place I found peace.

Yet, not a permanent peace. For in that peace arose some discontentment.

And so I found myself wondering,

“How can travel one’s true path and stay true to the law of least resistance?” After all, growth happens outside one’s comfort zone.

“The law of least resistance applies most aptly within the context of the law of dharma. If you know what you want to do and what makes you happy, based on self-awareness, then you can find the most effective way to pursue it. That is knowing your dharma.

But if you don’t know your inner truth and what direction your path lies, then you can’t rely on whatever drifts your way and comes with the least criticism, as a way of discovering your life journey.”

“Bear in mind the path of least resistance can sometimes require great strength and determination. Think of how a 30 mile road trip over a mountain pass may actually be a more efficient path that uses less energy than a 300 mile detour around the mountain range.” 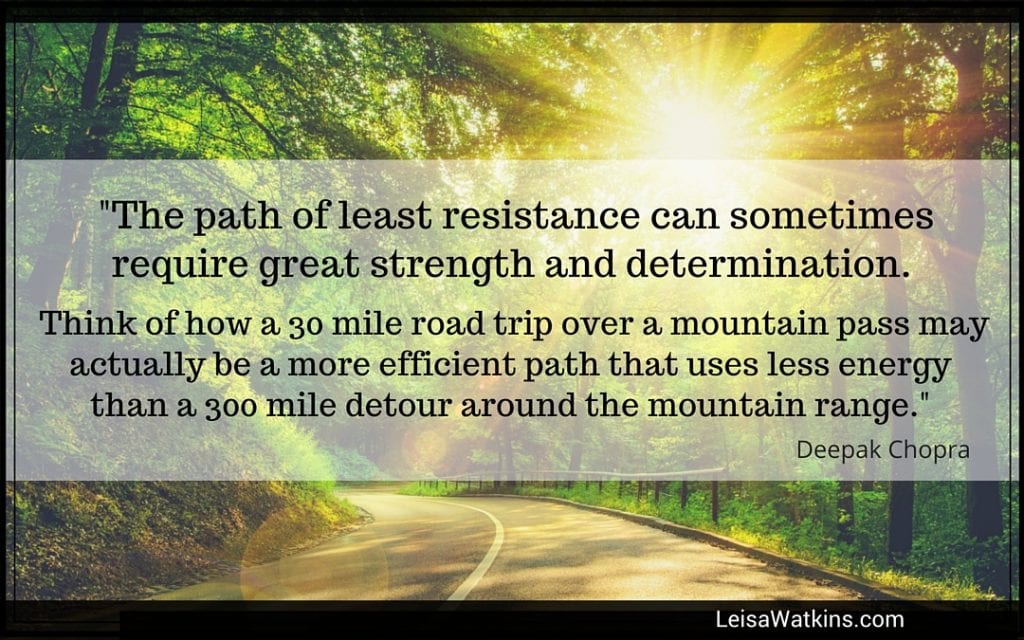 I know my path.  I am on my journey! I hear my inner truth. It is time to begin again.

I am building roads through mountain passes.

I am blazing trails that reach that peak summit.

Despite the work, it is my path of least resistance, because that journey was meant for me.

What have you learned about the law of least resistance?